“Values are Core”- Interview with Declan Gray, Founder of Evolve

Declan Gray is Founder of Evolve, a brand design agency who have been involved with LIFT from the beginning as one of our founding partners.  After Declan and his team finished the LIFT Roundtable process, we asked him how they got on.

What attracted you to LIFT?

As a brand design agency, one of our core principals is to understand and guide our customers along the path about how they define their companies mission, vision, values and the associated behaviours. We have put a lot of work into our own values and associated behaviours as we believe it is fundamental to how we maintain a good company culture.

Around the time LIFT was starting out, I had reason to question our company’s value base system, which I believe grew from my business partners and my own personal values.  We had ignored some of our own beliefs with a hire that we made and in a very short period the ramifications of this came back to us. For an SME this alone spearheaded my decision that values were not just important for me, but also the people that I surround myself with on a day to day basis. 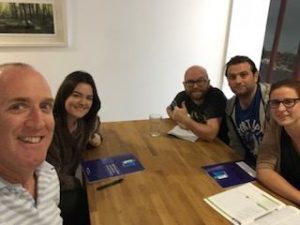 Has your understanding of what being a leader is changed after participating in the LIFT initiative?

I’ve always had the ability to stop and think of all the variables and to take into consideration other people’s feelings, however values may not have ranked highly in my decision making process, whereas they rank much higher now.

What were the reasons you had when choosing the participants for your Roundtable?

As the company owner you are sometimes not seen as a person, but as ’the boss’ and I wanted everybody to get to know each other as people and not fellow workers . . . including me!

When and where did your roundtables take place?

Every week in the office at the end of the day before the staff were due to go home. This ensured that they would also hold me to task as the facilitator on the time we should spend. However, what I learned was that even though the working day had elapsed and we finished our roundtable they were still happy to stay and discuss the topic further.

Did any of the eight themes particularly resonate with you or your group?  Why do you think that was?  Did you find any difficult to discuss?

Honesty & Integrity.  After we had looked at this particular topic, we had a very thorough discussion because of the nature of ‘White Lies’ and protecting other peoples feelings. In the end we settled on an acceptance that as long as you didn’t inflict harm, certain ’non’ truths were acceptable.

Did you have any issues getting participant engagement or maintaining their engagement? If so, how did you deal with this and how did the issue get resolve?

No, and surprisingly the individuals who I felt would be standoffish were the ones that were the most engaged.

Did you notice any positive changes about your group during the process?

We now have conversations about values outside the roundtables, especially where participants had children.

What was your own personal experience?

What benefits do you think your company will get from participating in LIFT?

Better team building which results a closer family based culture where they look out for each other and think about our customers in the same way.

Have you noticed a shift in employee engagement?

Do you plan on hosting another Roundtable?

I am already on another roundtable with the same people and one additional person as they wanted to go again!

What is the single biggest take away you have from facilitating a LIFT Roundtable?

Values are at the core of how we live, work and play every day and their importance can be overshadowed far too easily.

If you could host a Roundtable in any company / organisation in Ireland, what would it be and why?

I would like to take the key players who were instrumental in the country’s demise during the most recent recession, so I could really see what sort of people we had running the country and this way I could try and make sense of their value based beliefs or lack of . . .