“I was looking at the bins in our school and thought it such a shame that we weren’t doing more to separate our waste. I wondered if there was anything I could do about it. ”

We asked Cillian, a transition year student at CBC Monkstown in Dun Laoghaire if he’d noticed any changes in himself since becoming a LIFT facilitator. Cillian started to tell us a story about his school’s recycling system. The way in which a school separates their waste mightn’t seem like it has much to do with LIFT. However, in this case, it says a lot about personal development, taking action, standing out, and becoming a leader in everyday life. Before we get into that however, let’s get up to speed on Cillian’s story.

“I first heard of LIFT through my mother (Cillian’s mother is HR Manager with PREM, a LIFT partner). She was telling me about LIFT and how great it’s been for her and the people at her work. I’d never heard of LIFT before but decided it was something I wanted to try out.

I went along to my first facilitator training session in June (2019) and absolutely loved it. I found the process so simple yet hugely informative. There were people there from all walks of life and all different backgrounds. There were a few students and a lot of businesspeople, the ages ranged from about 14 to 60. Everyone seemed to get a lot out of it. So much of what was being discussed on the day reflected my own core values and I liked how accessible it was to everyone.”

While partaking in his first facilitator training, Cillian examined a LIFT banner which was adorned with signatures of past participants. While examining the banner, Cillian noticed a familiar name – it was one of the teachers. This set in motion Cillian’s effort to bring LIFT to his school.

“I approached my teacher, Mr. Fitzmaurice about using LIFT’s leadership learning process at our school and he was all for it. The first roundtable I held was between myself and four of my friends. Over the course of eight weeks, we had eight lunchtime sessions together. The feedback was brilliant. Like me, the other students in the group enjoyed the discussions that came from examining the leadership values. The roundtables create a really safe environment where you can voice your opinion about something without it affecting anyone else.”

Having completed his first 8-week LIFT roundtable, Cillian shared his future plans with us.

“It would be amazing to roll out LIFT to the entire school. I’m currently discussing this with the principal and other teachers. We’re trying to figure out the best approach. I think that all students would benefit hugely from LIFT. However, it’s also difficult to ask students to partake in roundtables during their lunch hour. We all have a lot going on already. For the time being, I am lining up my second roundtable group and I’m writing a piece about LIFT, which I will get to publish in our school’s yearbook. I’m also hoping to get the chance to speak about LIFT at the TY graduation.” 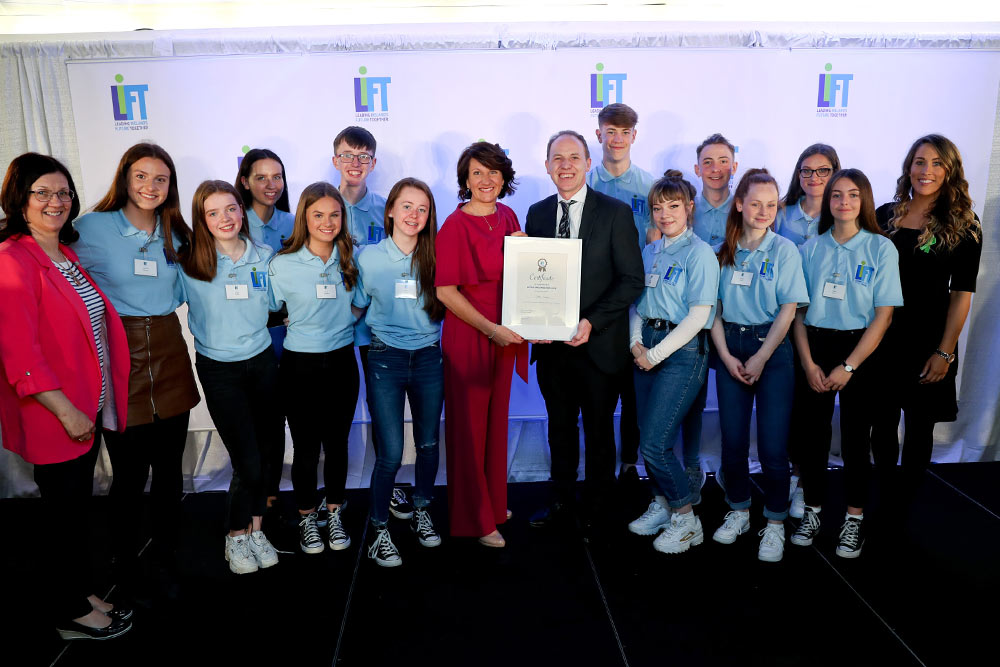 We’ve been very impressed by the drive and initiative that Cillian has shown since becoming a LIFT facilitator. It’s great to see a student with such enthusiasm for the programme. Cillian has shown himself to be a leader and an individual that’s not afraid to stand out and make an impact. There is no better example of this than when he saw an opportunity to change the way his school managed their recycling.

“I was looking at the bins in our school and thought it was such a shame that we weren’t doing more to separate our waste. Everything was going into the one bin. I wondered if there was anything I could do about it and if there was anything I could do to better serve the environment. I approached one of my teachers and we agreed that something needed to be done. I’m delighted to say that now, our school is part of the ‘Green-Schools’ initiative. I think what I’ve learned through LIFT helped me to take action. ”

“As part of the initiative, I’ve been speaking to other classes about sustainability, protecting the environment and the little things we can do to make our school more eco-friendly. LIFT has provided me with a solid base for giving these talks. Whenever I’m speaking to a class, I’m very conscious of the different beliefs and backgrounds of people in the room. I try to show respect, empathy and understanding. As for the talks themselves, competence plays a big part. Although I’ve never been too phased by public speaking, I’ve come to realise that confidence comes from competence. It’s amazing how interconnected all of LIFT’s values are when it comes to leadership. Oh, and when someone asks a question, I make sure to listen.”

“Students are under a lot of pressure at school. End of year exams can cause a lot of stress. But outside of that there’s a lot of peer pressure. It seems that everyone just wants to fit in and there’s huge pressure to do so. Some people don’t even understand what it means to stand out. It’s like standing out is a bad thing.

For me personally, I’ve grown up with strong core values that guide what I do. I think that, in the same way, LIFT’s core values could really benefit students.”

We were delighted to get a chance to speak with Cillian. There are many incredible students involved in LIFT who have inspired us and will no doubt continue to inspire those around them. Cillian is definitely one of them.

Want to hear from more of our facilitators?

Fill out the form below and one of our team will get in touch with you shortly.